I'm falling into this pattern:

Refactor (until you make it)

So before I did as little 'express intention' as possible.

This caused the Object Calisthenics to drive more of the changes.

Now I'm refactoring for intention, without any Object Calisthenics requiring it.

But these refactors, when done, leave a couple Object Calisthenics rules broken.

Which was a mayor design driver previously

The 'until you make it' part, does feel like it can lead to less code coverage.

I don't have the following test case:

because I 'until I make it'-ed

The acceptance test, does cover this.

But it still feels like there is something missing.

Maybe I'll figure out when I'm trying to use tests as documentation..?

In 'tests as documentation', it shows that I'm not that confident that everything works. 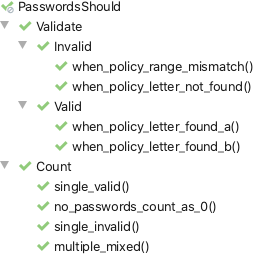 And there is something missing:

I'm also wondering whether the whole Valid and Count should be separate unit tests, each testing a smaller scope.

Now I'm treating everything as a blackbox.

But that makes the tests all dependant on basic counting working.

But if counting breaks, for example always returning 0. 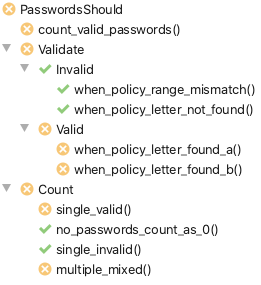 Making them less blackbox, but testing the smaller units specifically solves this. 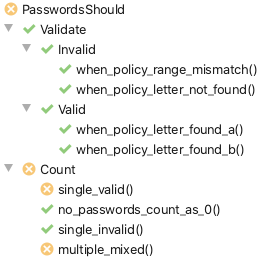 Here it is clear that something is messed up with counting, but validation is still fine.

The concern I have with testing smaller units though, is they then create friction for refactoring...

3)Wrap All Primitives And Strings

Do we need to wrap booleans?

I first wrapped them into classes.(as inner classes)

and then later refactored it into enums

I'm not too happy with the parsing that happens in static factory methods.

I'd love to "put a bad feeling into a test" like mentioned in Book: Test Driven Development: By Example - Kent Beck

But I don't think this is a case where that applies.

It also bothers me that Model: Object Calisthenics does not seem to have a problem with these one-liners with lots of hardcoded values.

One driver that seems to cause change here is "express intent" from Model: 4 rules of simple design

Because the string is seen as a class, and I'm accessing the string's parts directly...

I made a wrong generalisation.

In day1 the input was a string, and I kept it as a string instead of parsing it to the int it was.

And I was kind of surprised that I didn't need to parse it to an int, because there were no getters.

I know it looks like getters, but those are only used in the default implementation of the interface.

So in a language with multiple inheritance, I could have made both methods protected.

So nobody uses those, except it's parent class.

Back to the point I was making.

The field was not parsed to int on creation.

But I was doing the same thing in day2,

but in a case where the string contained multiple values!

That is where I went wrong!

is a very different case from whether to store

I feel like the parsing should happen at one place.

And now it happens everywhere.

Every class knows how to parse itself from a string.

And putting that in static factory methods does not make it better.

I think this feeling is like the Pattern: Anti-Corruption layer from DDD.

Guarding my domain against all this ugly parsing stuff.