Video: The Dehumanisation of Agile and Objects - James Coplien

[ ]mental models based on psychology research by pappart

[ ]mental models inspired by learning theory by p h a

[ ] Paper: A Personal Computer for Children of All Ages - Alan Kay

[ ] papers by Abrahamson and synnie alto

[ ] design after modernism by john tecuira

[ ]  by christopher alexander (he got his from this field) 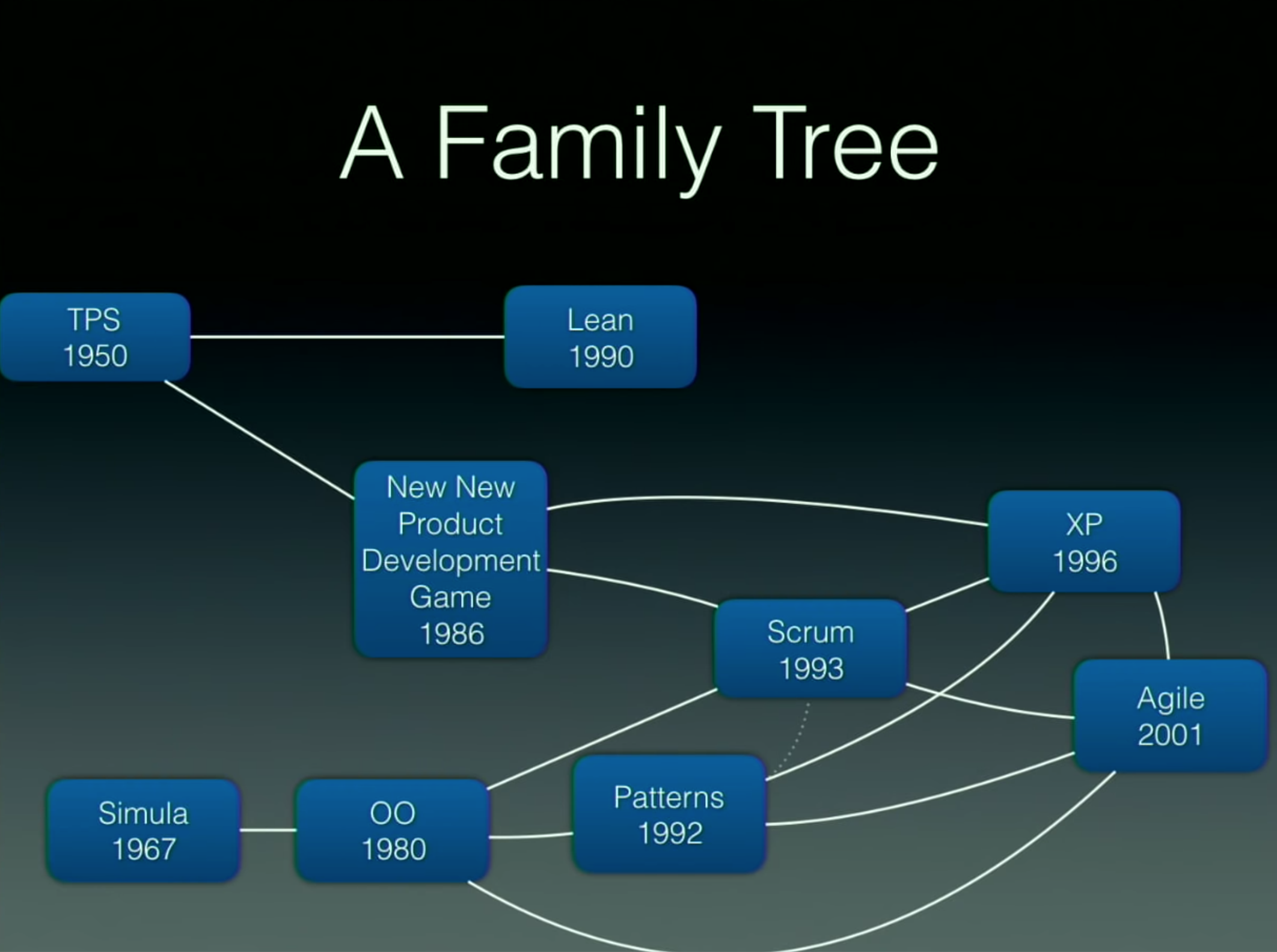 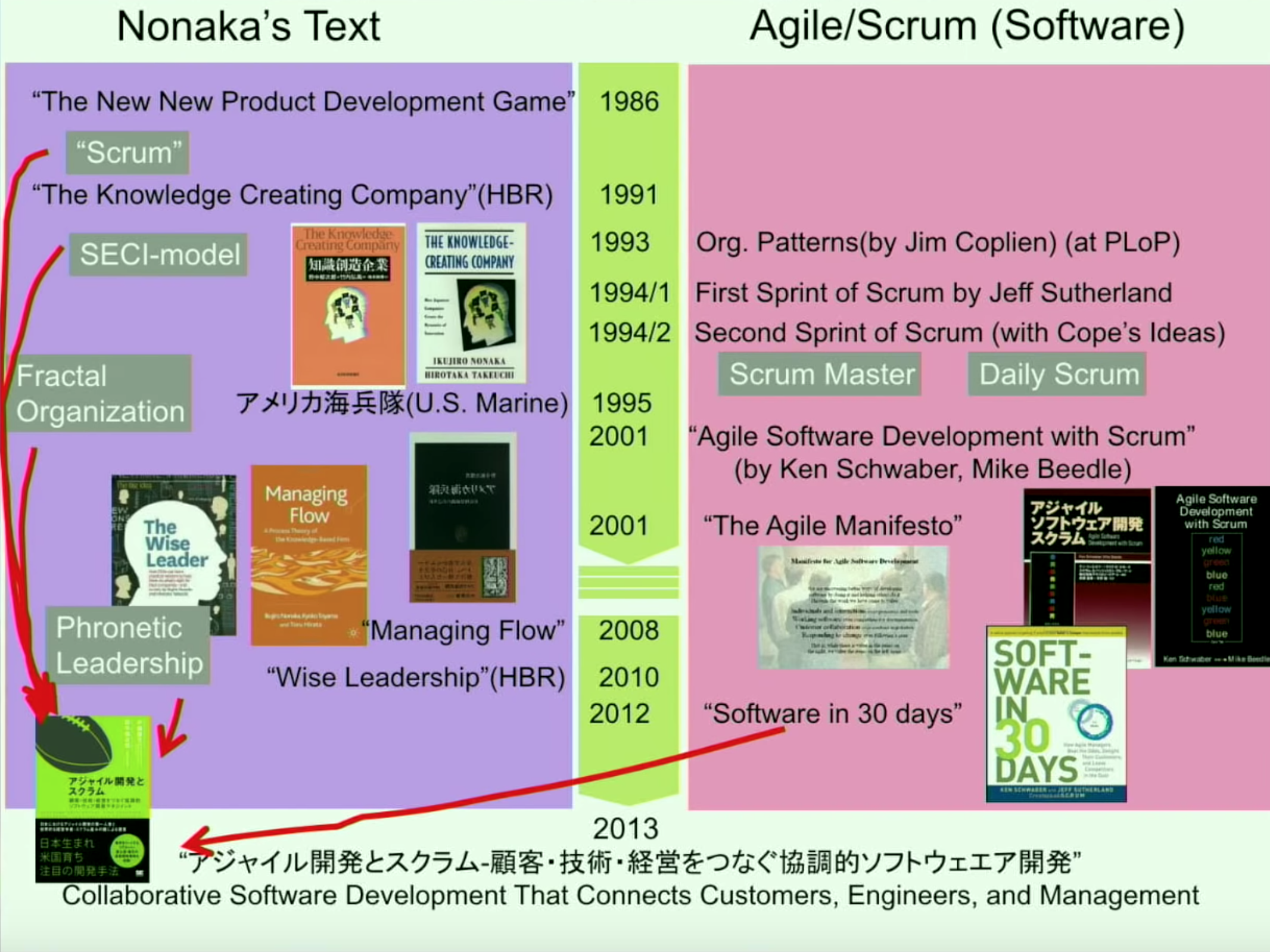 scrum based on toyota, instead of lean 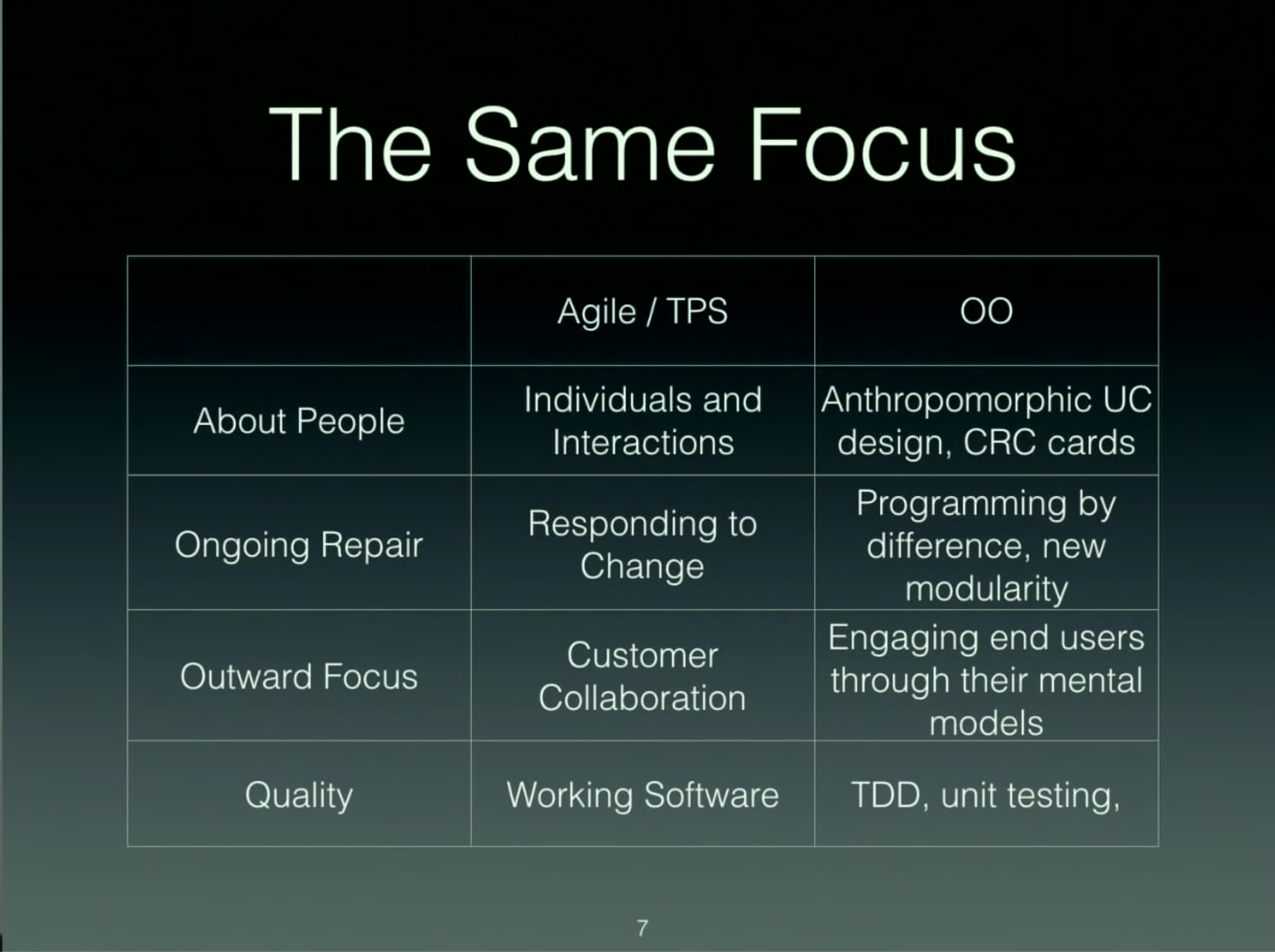 one of the best OO design

incrementally defining a new object by an old one

one model: representation in the machine of a model that is in the mind of the end user

goal: engage the person with the software so the 2 together become one mind

not interface and pluggable

learning theory by p h a 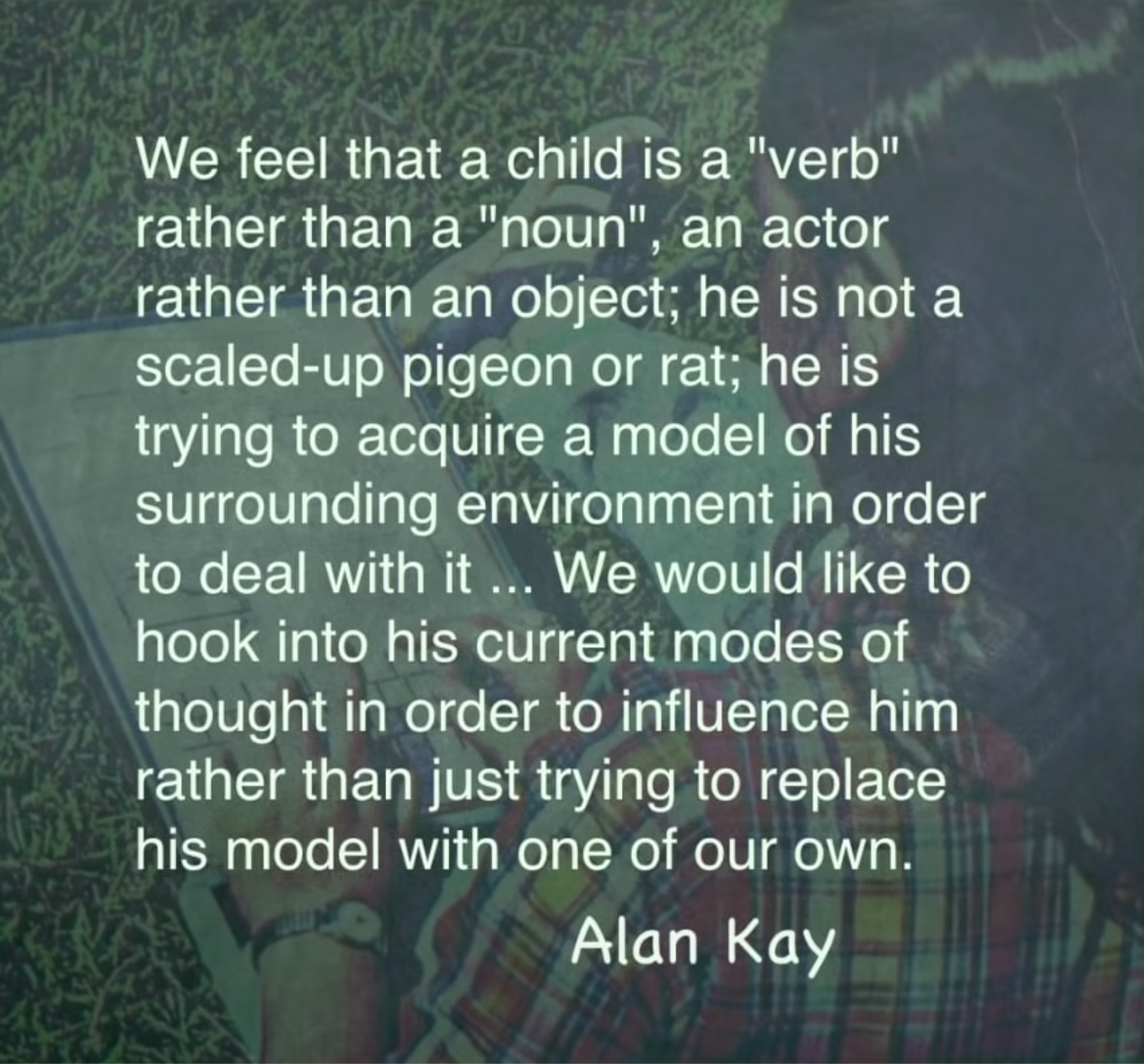 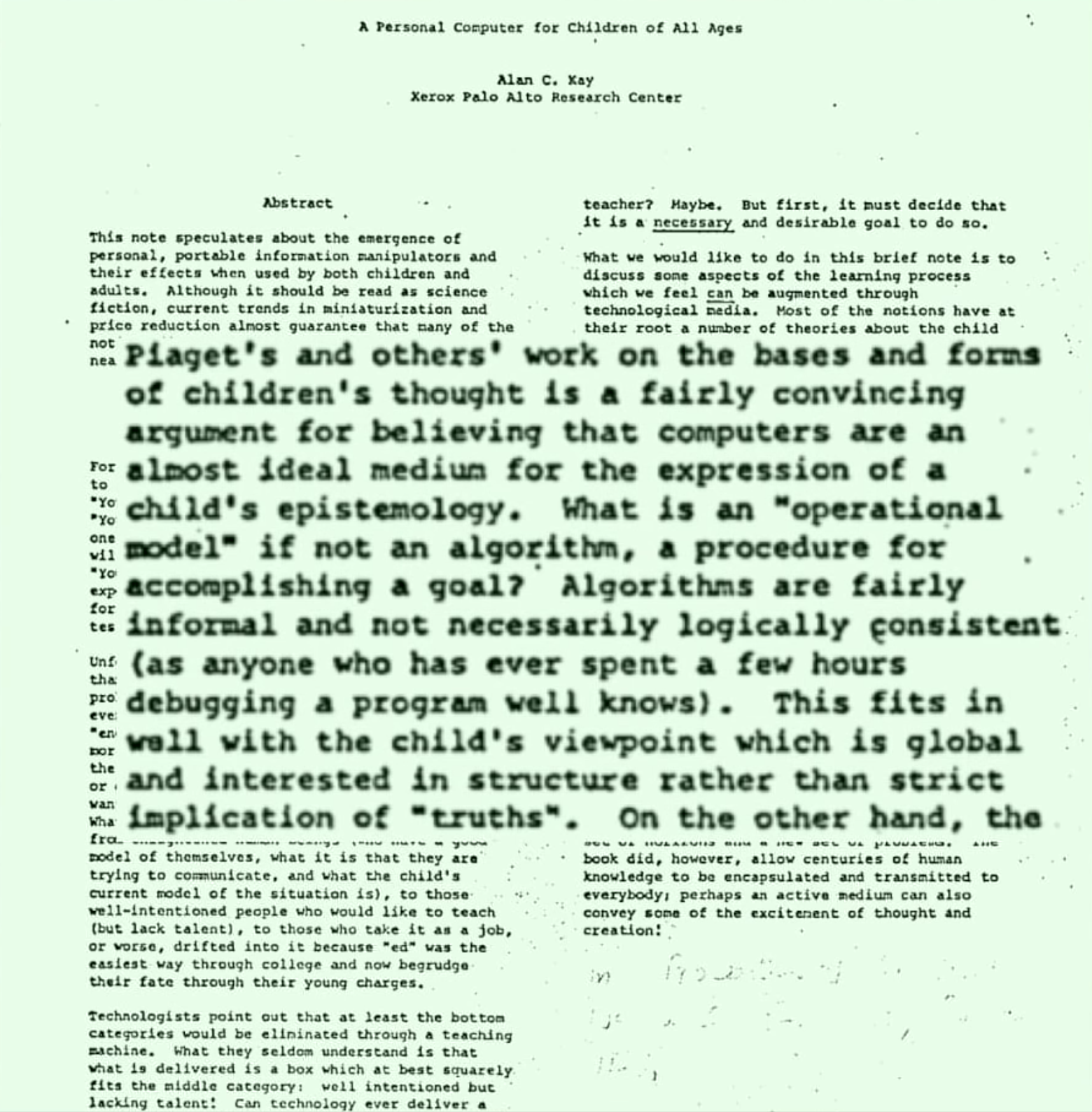 Paper: A Personal Computer for Children of All Ages - Alan Kay 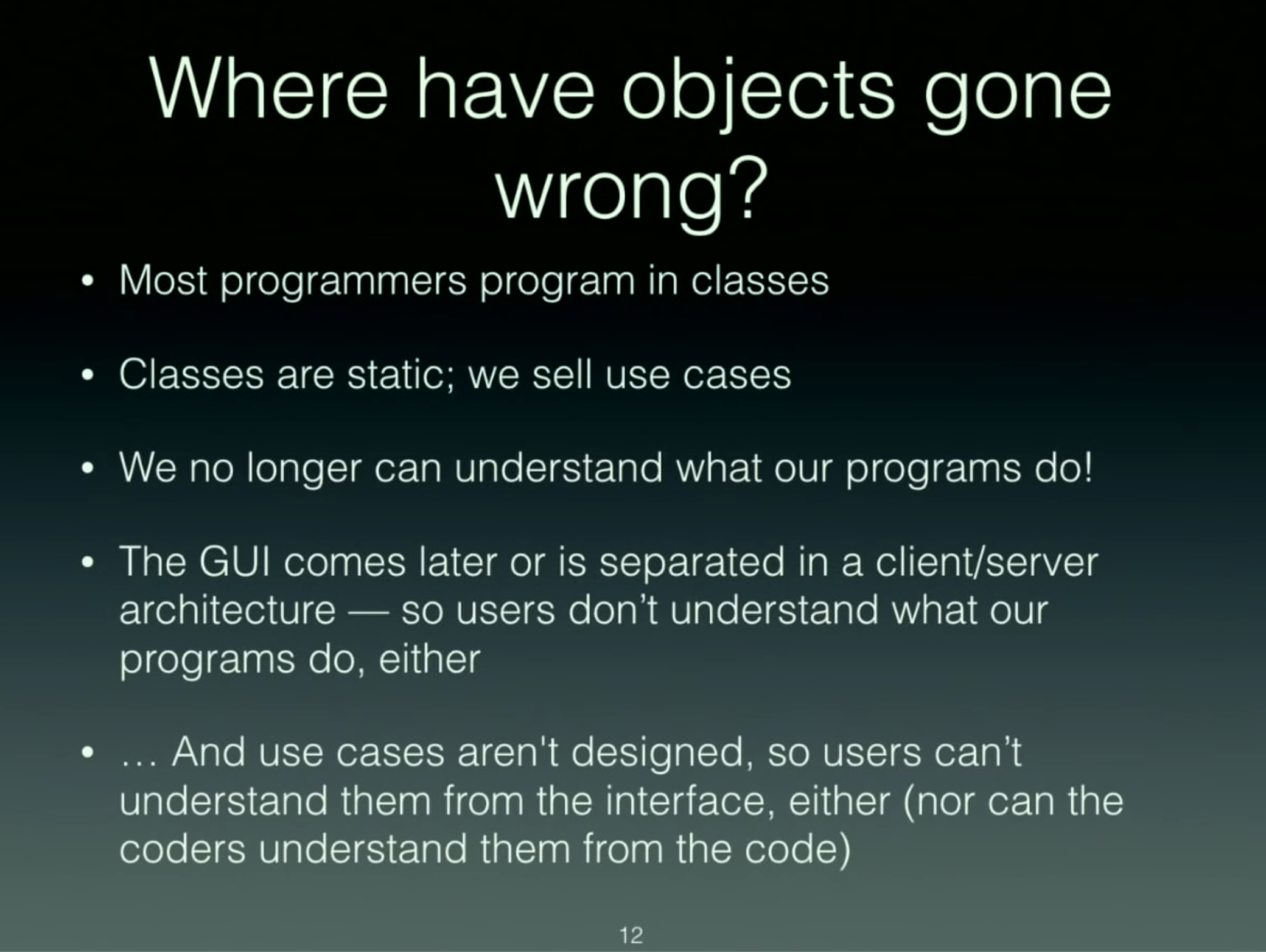 the interface is the product, the rest is waste 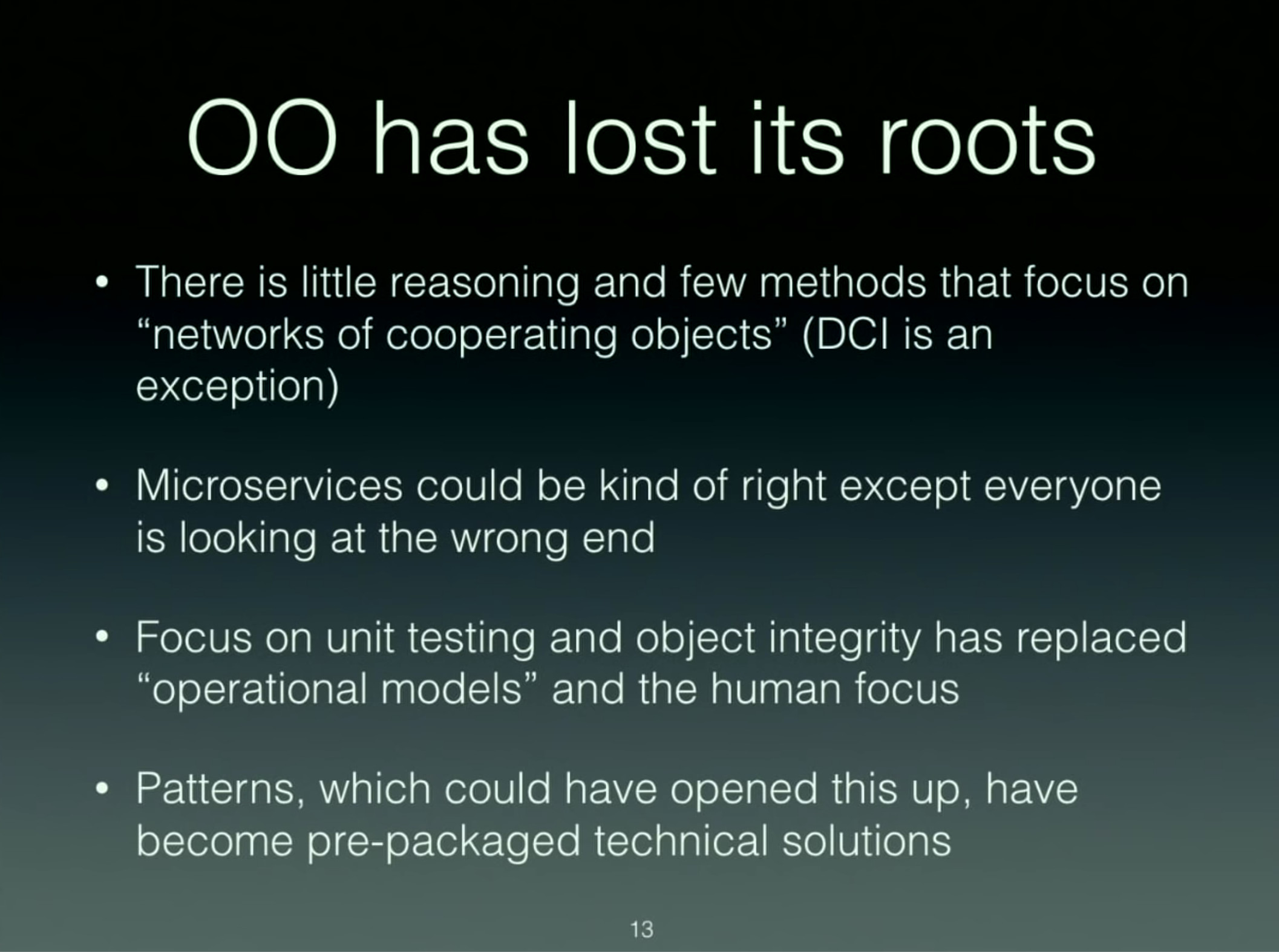 papers by Abrahamson and synnie alto

TDD is a design technique, forcing bottom up architecture

the coupling and cohesion metrics will kill you 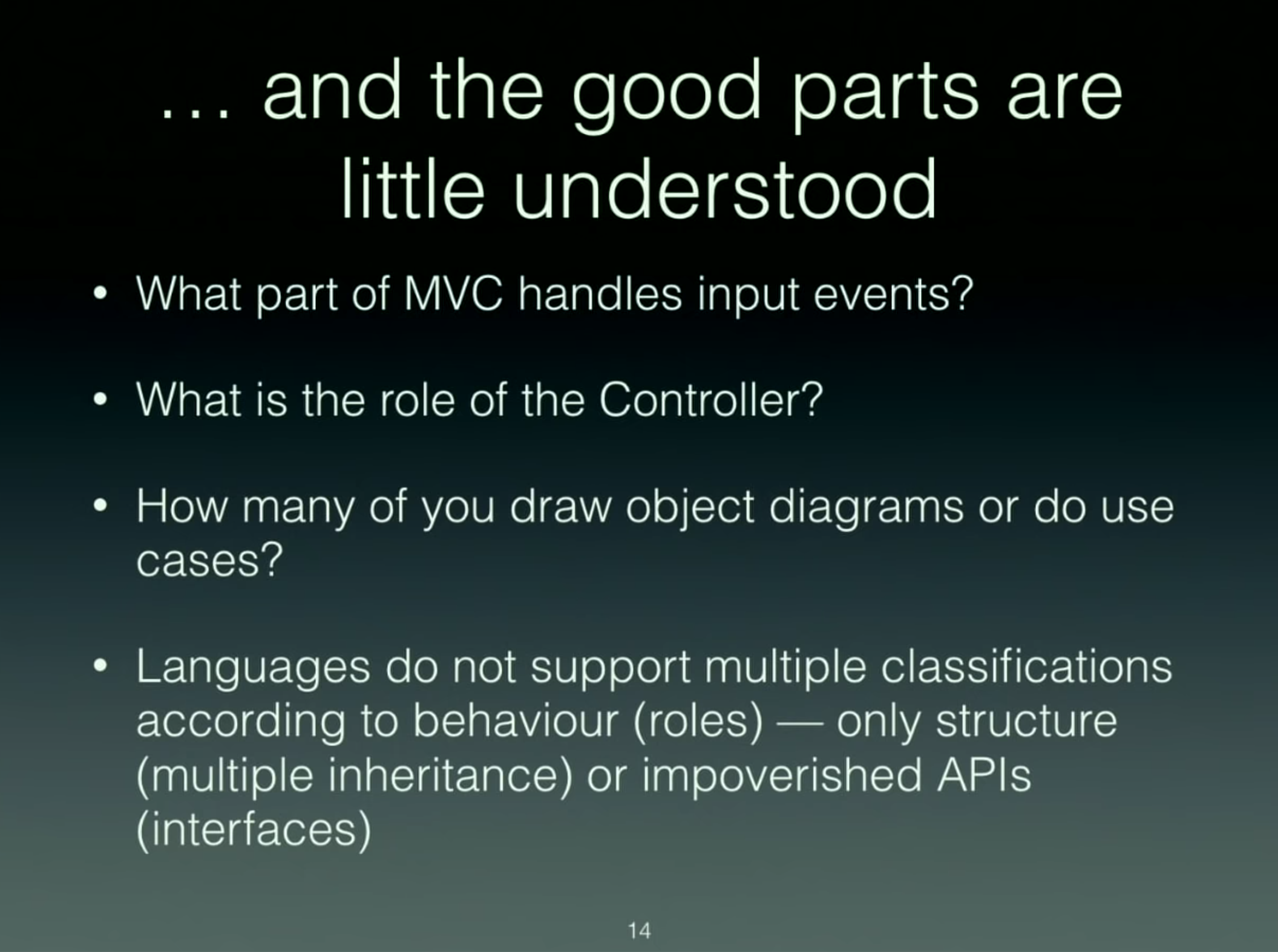 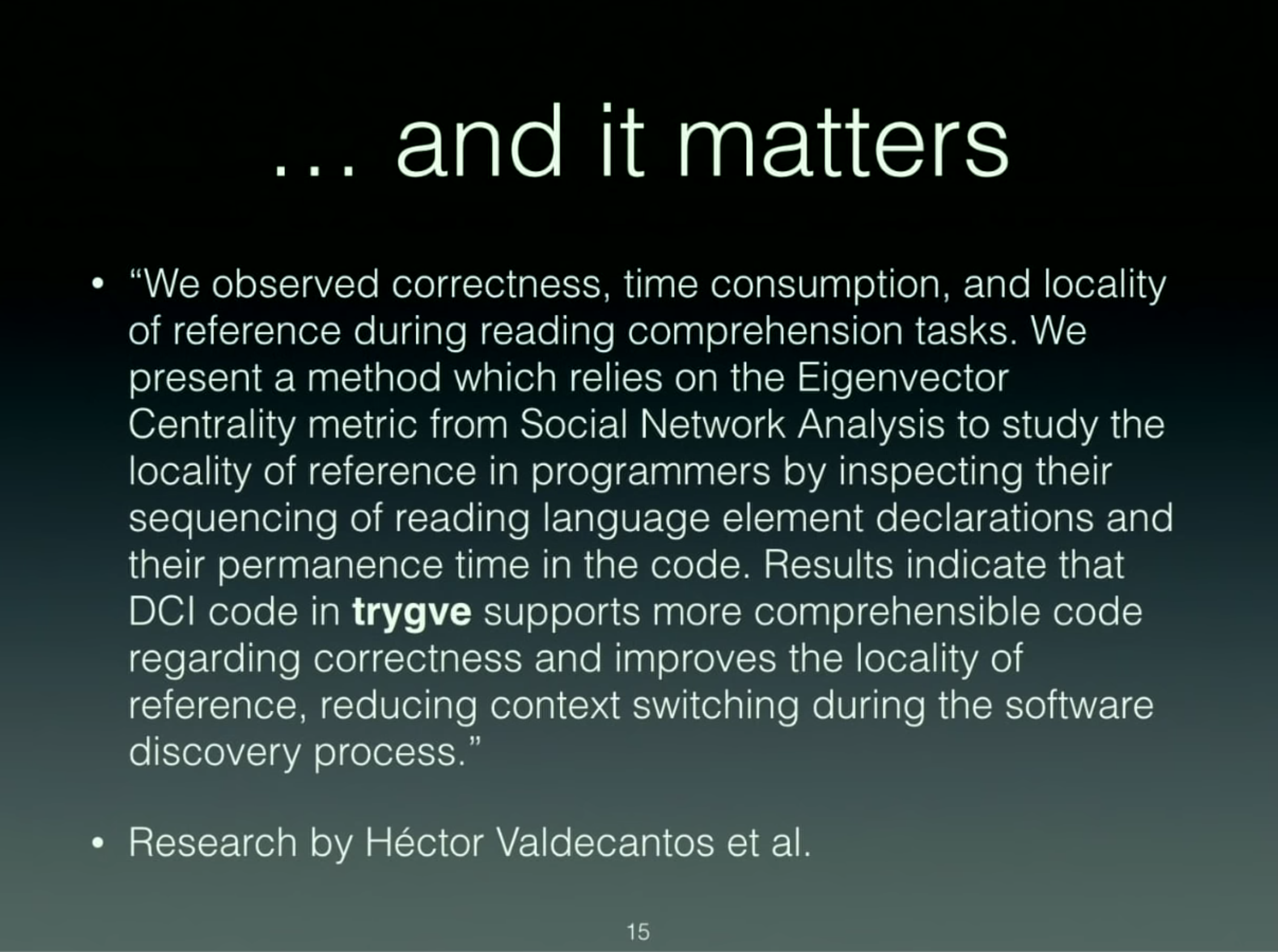 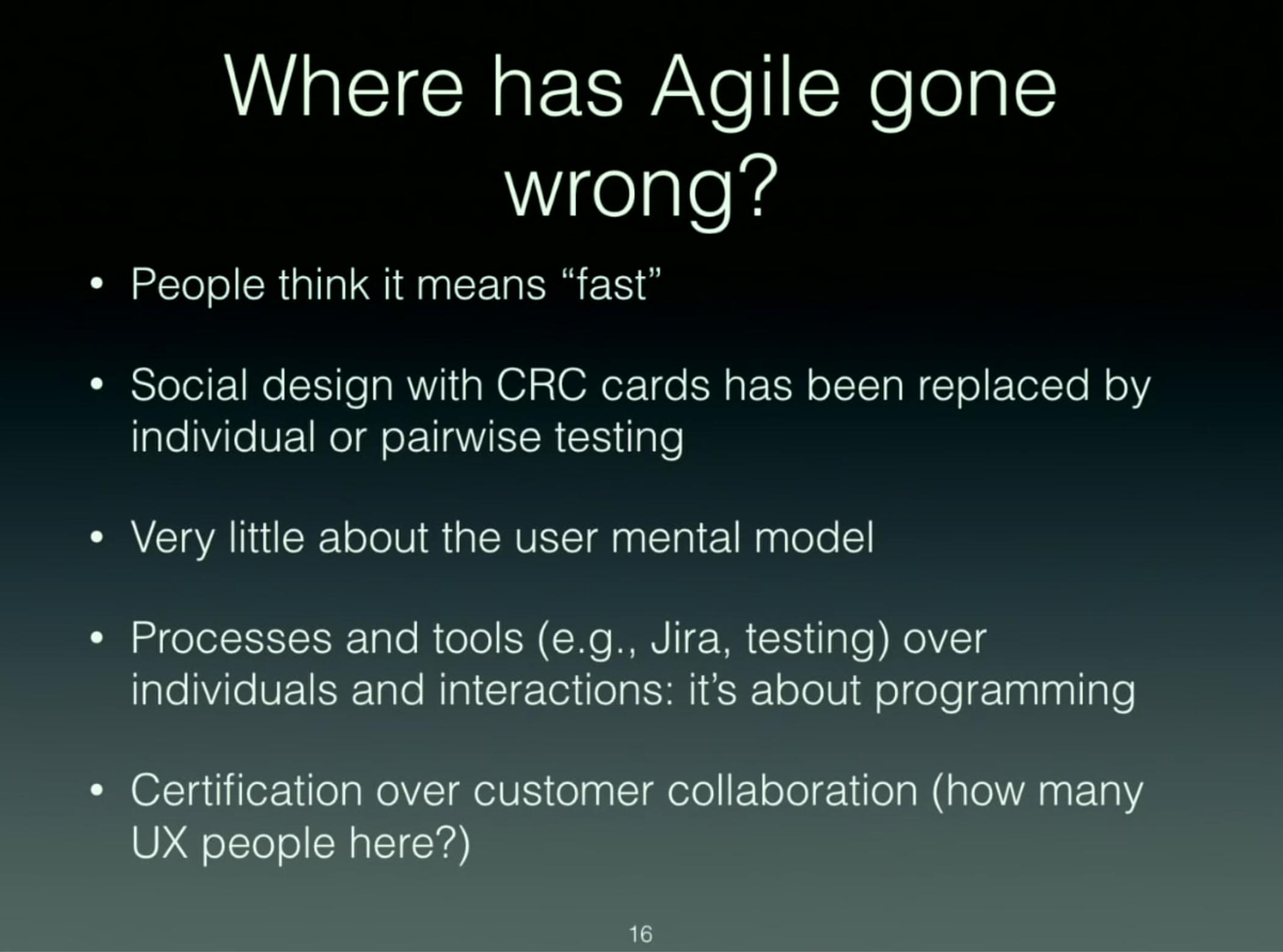 does not appear in agile

careful decisions made with long deliberation

opposite of what lean ppl mean

after which your ability to affect an outcome is taken away

pull those as early as possible 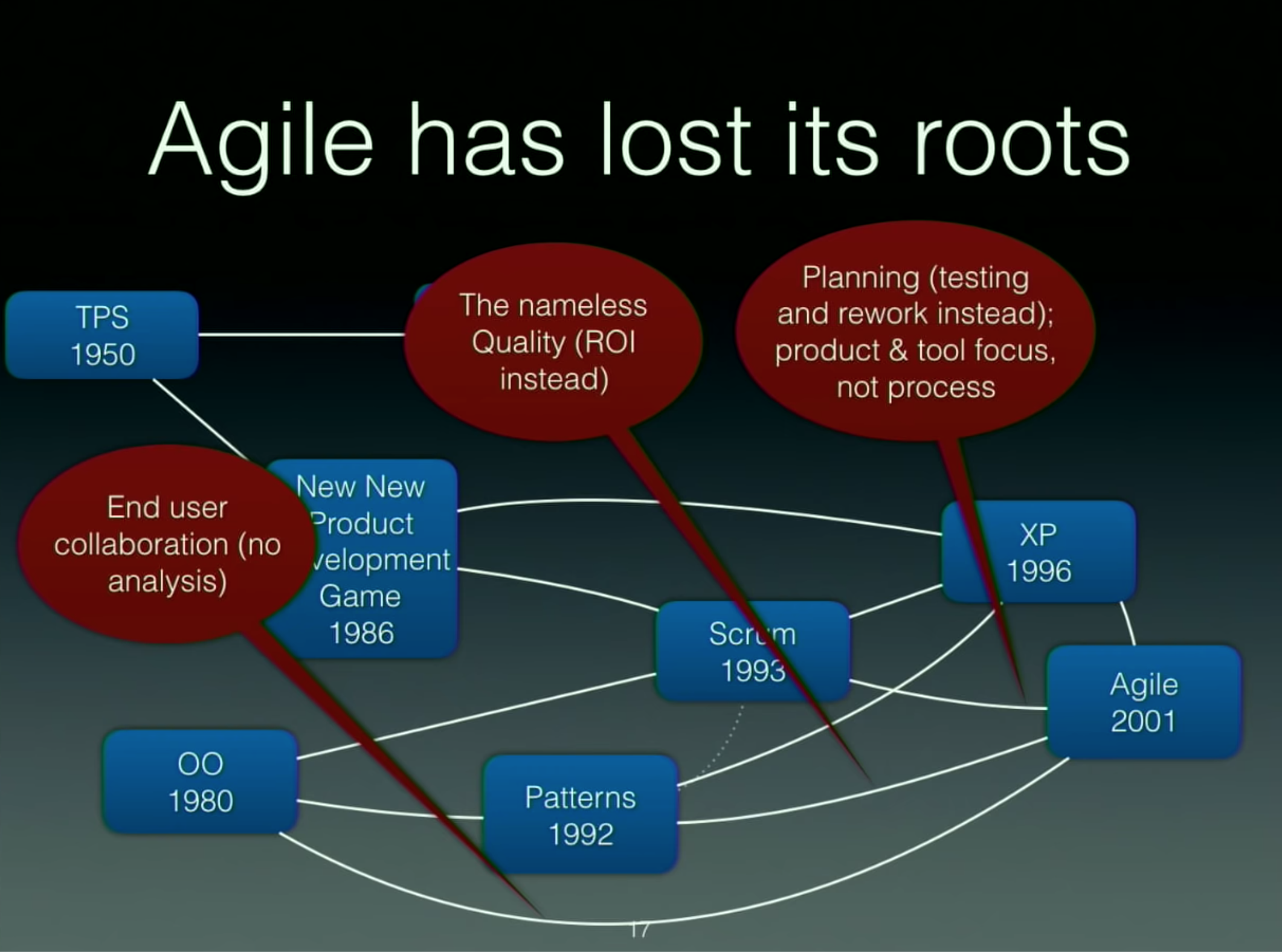 quality without a name 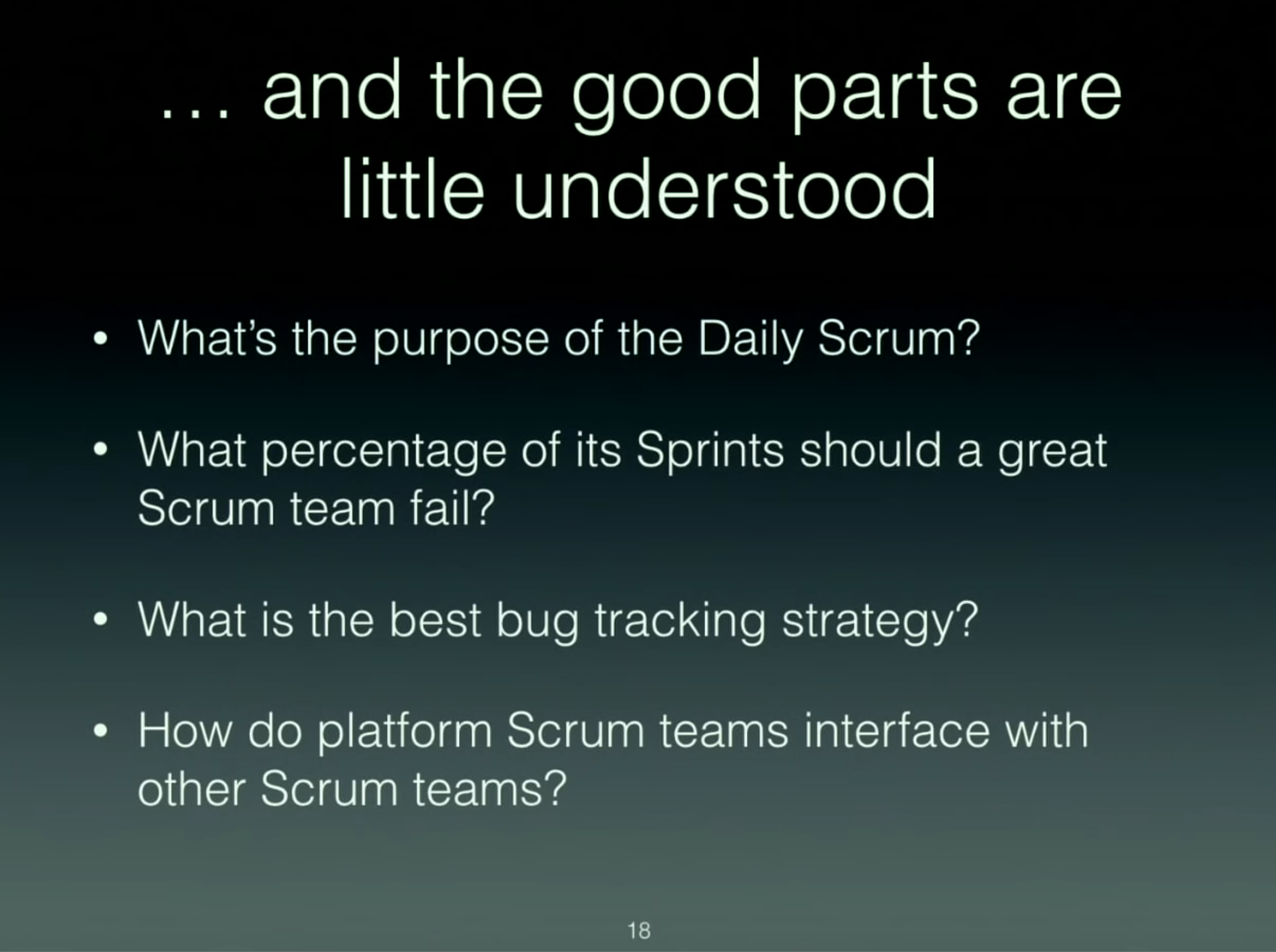 = replan of your weekly planning

interface with other scrum teams?

no handoffs in scum 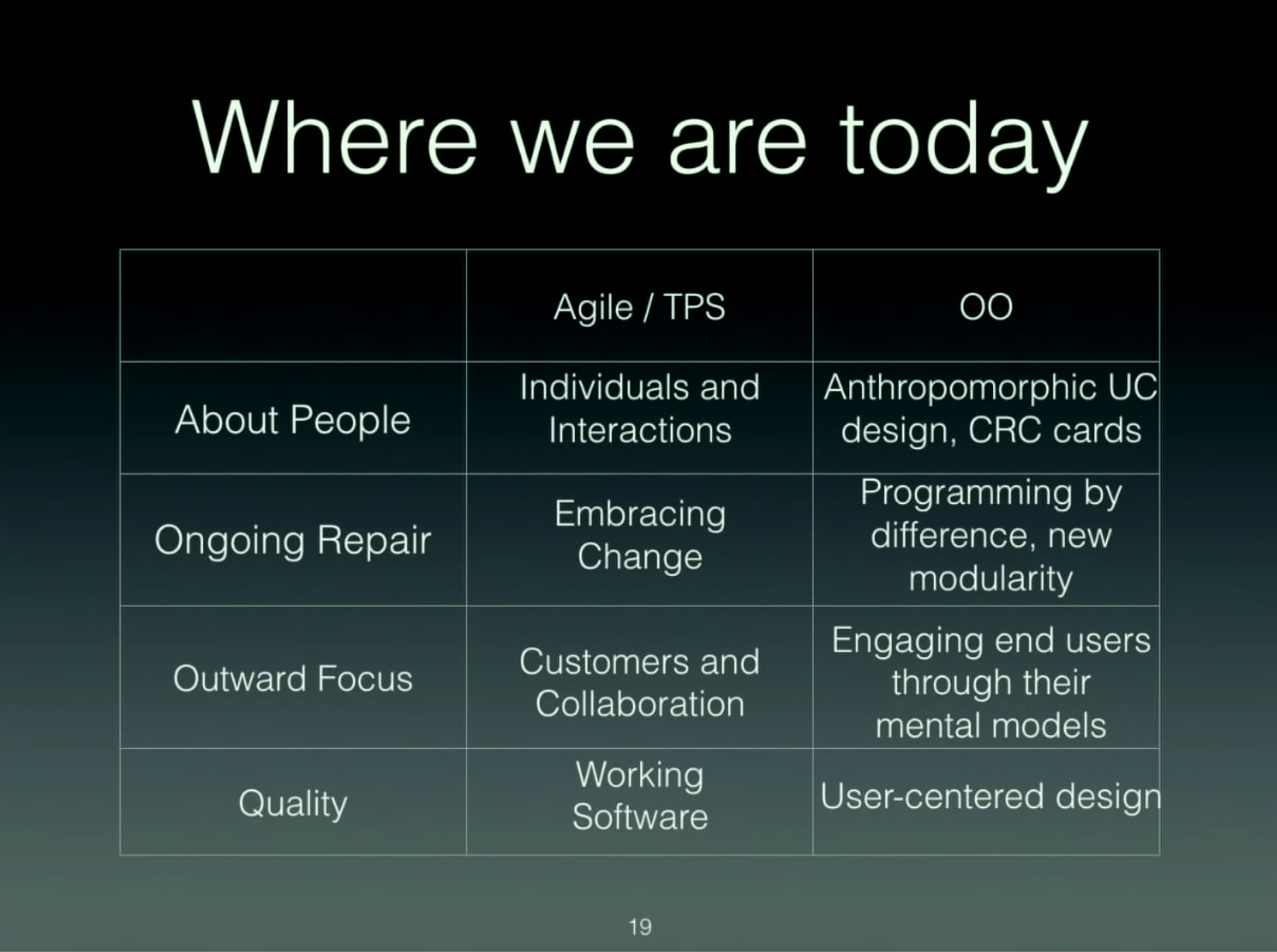 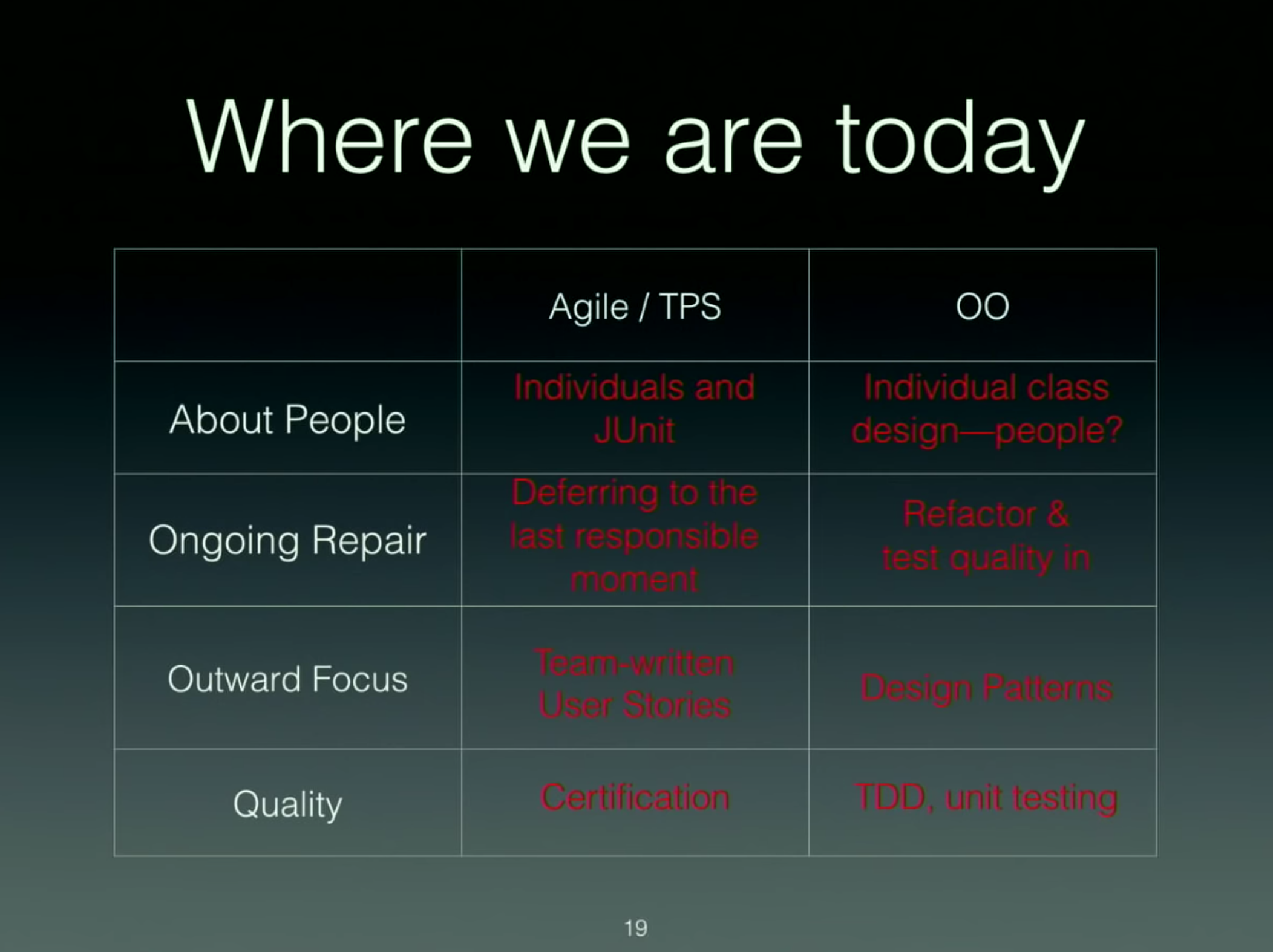 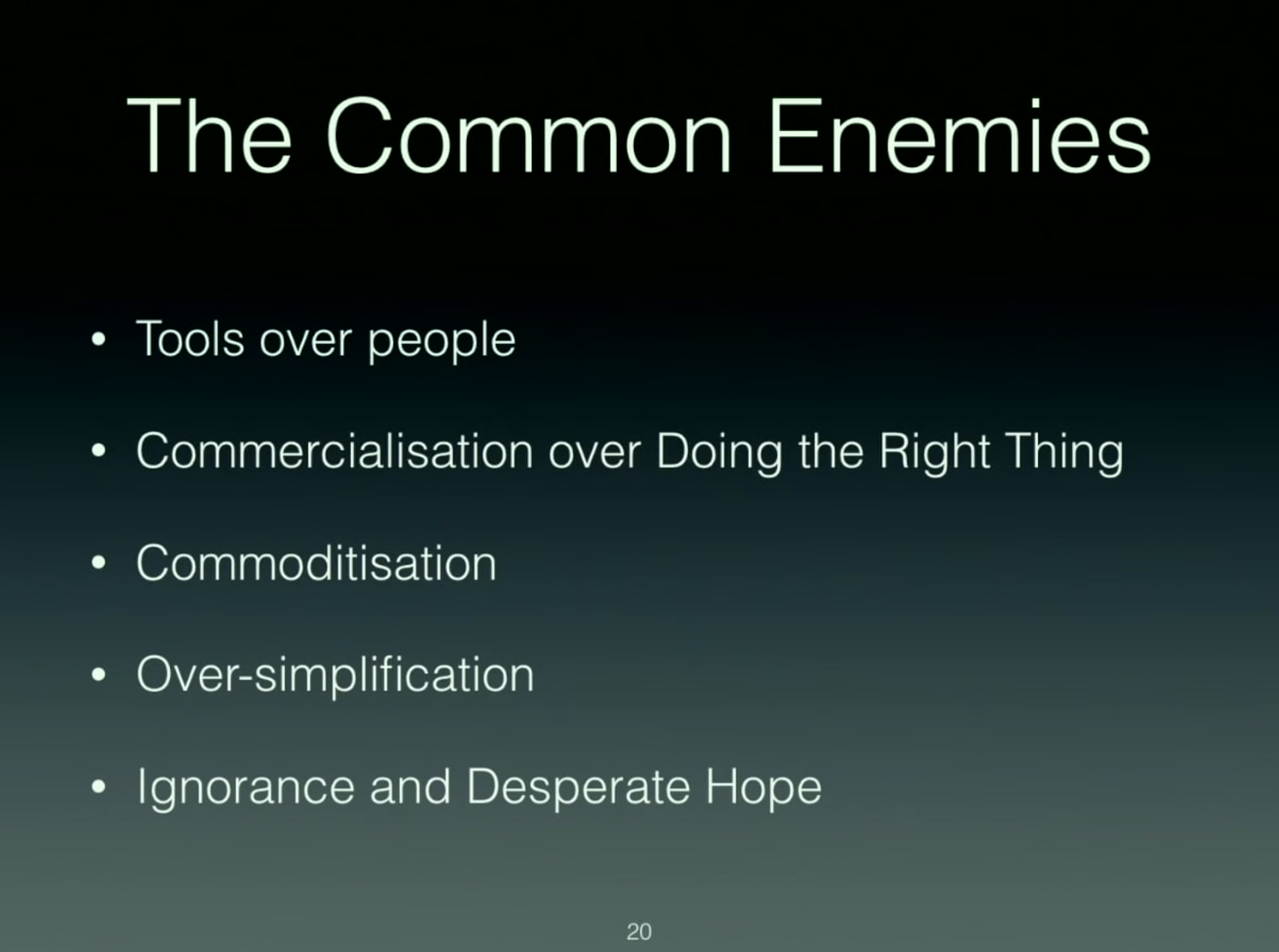 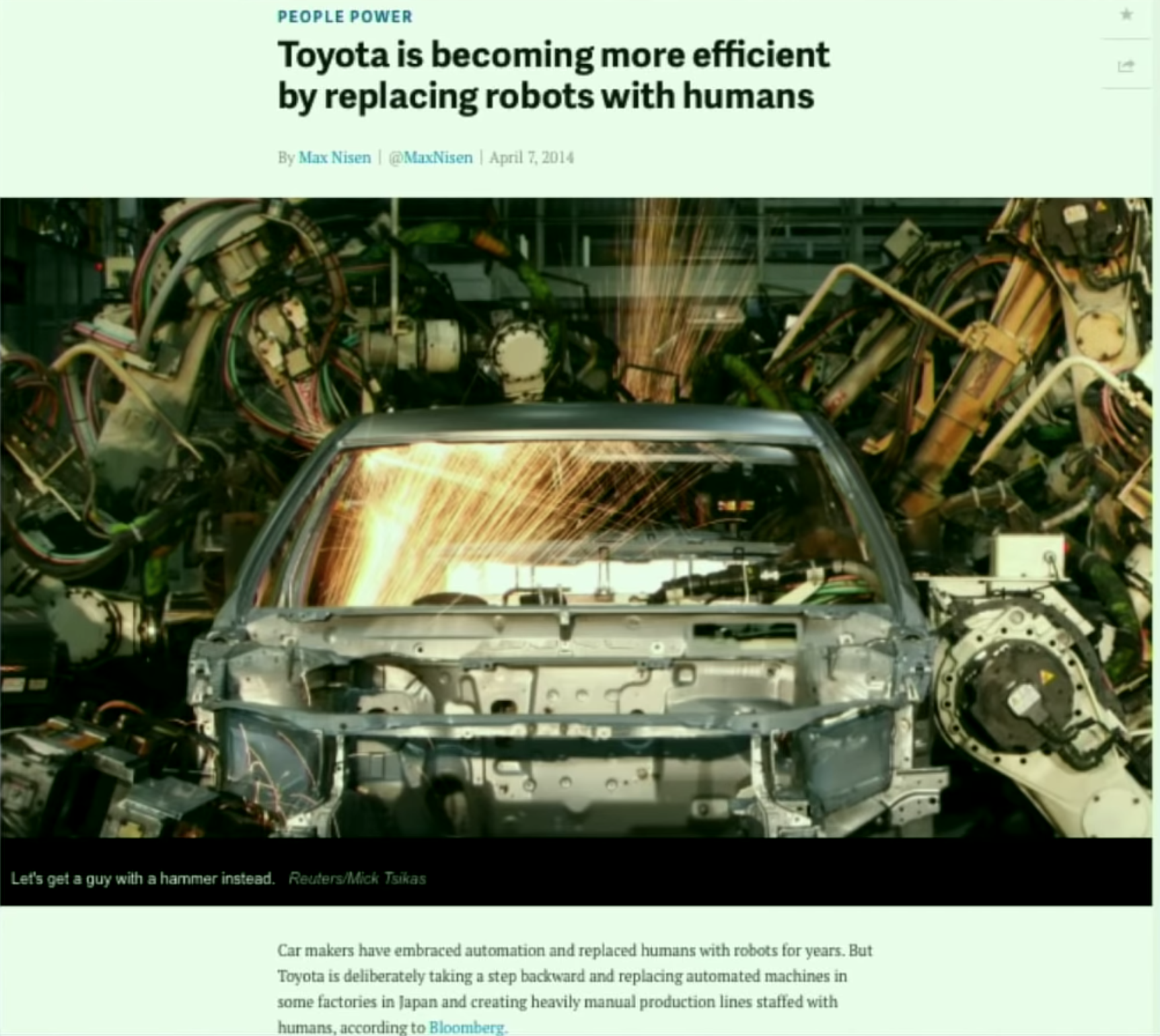 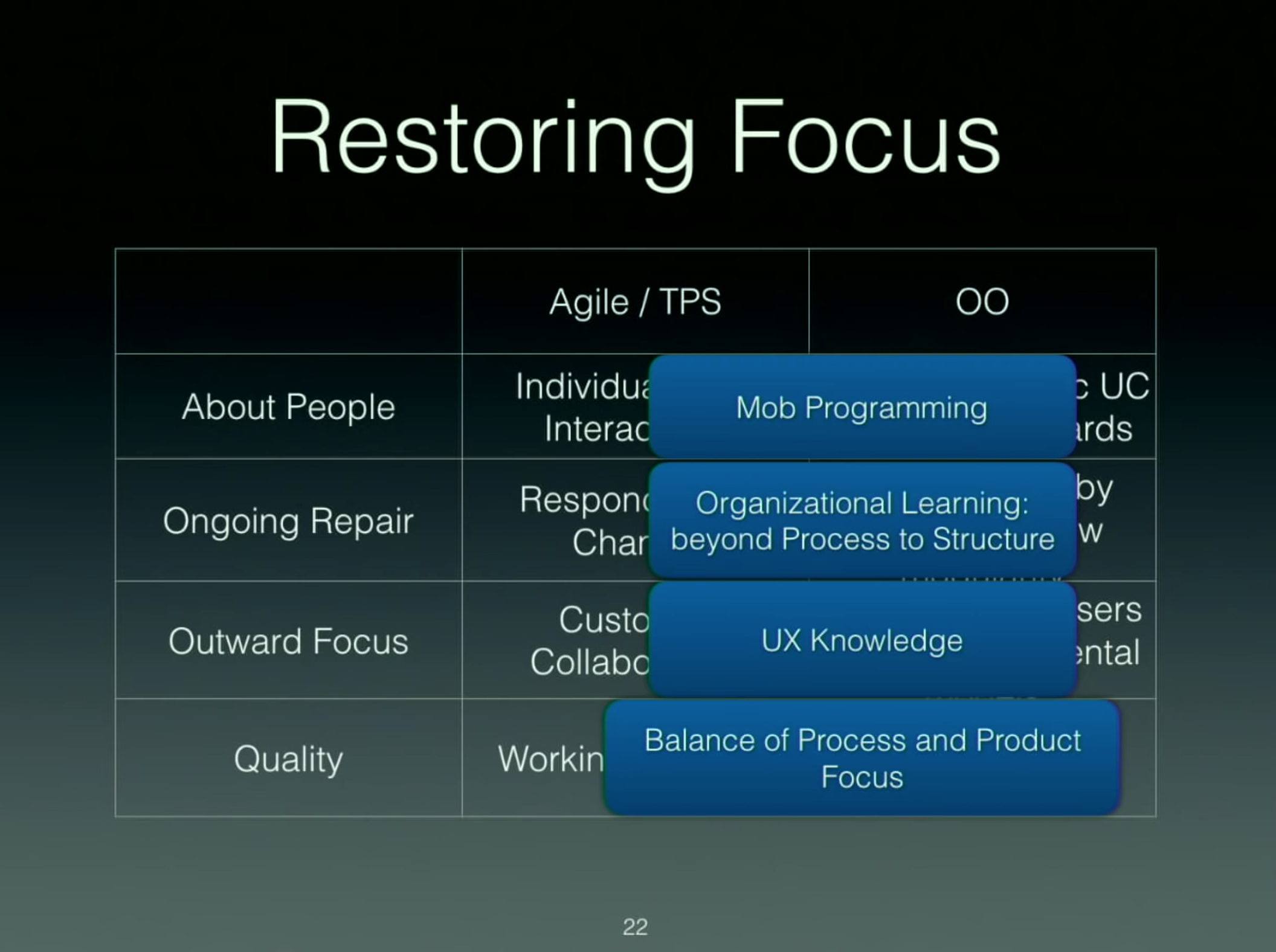 NOT rebuilt team every time

too focused on product

scrum is one framework which offers this 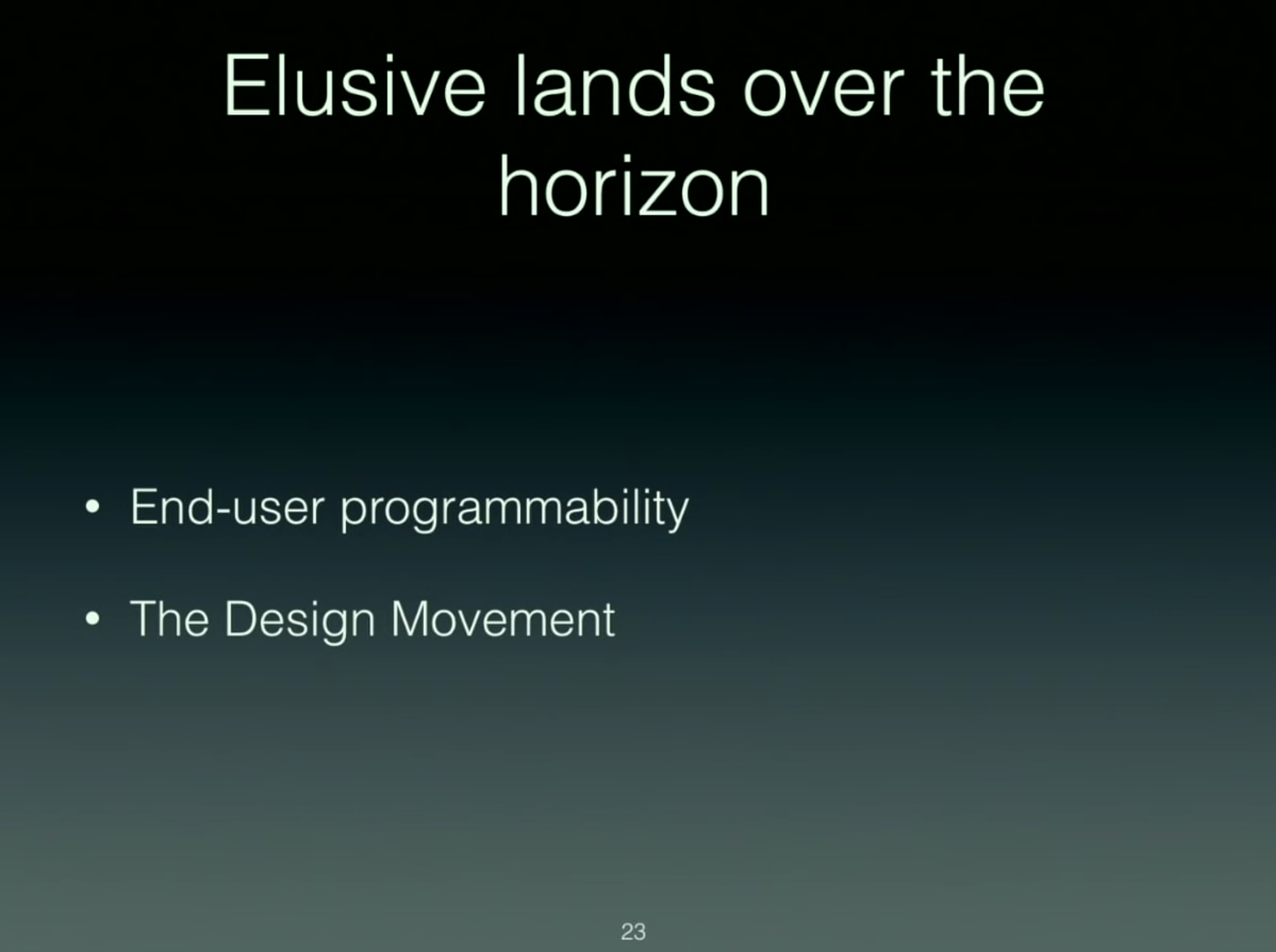 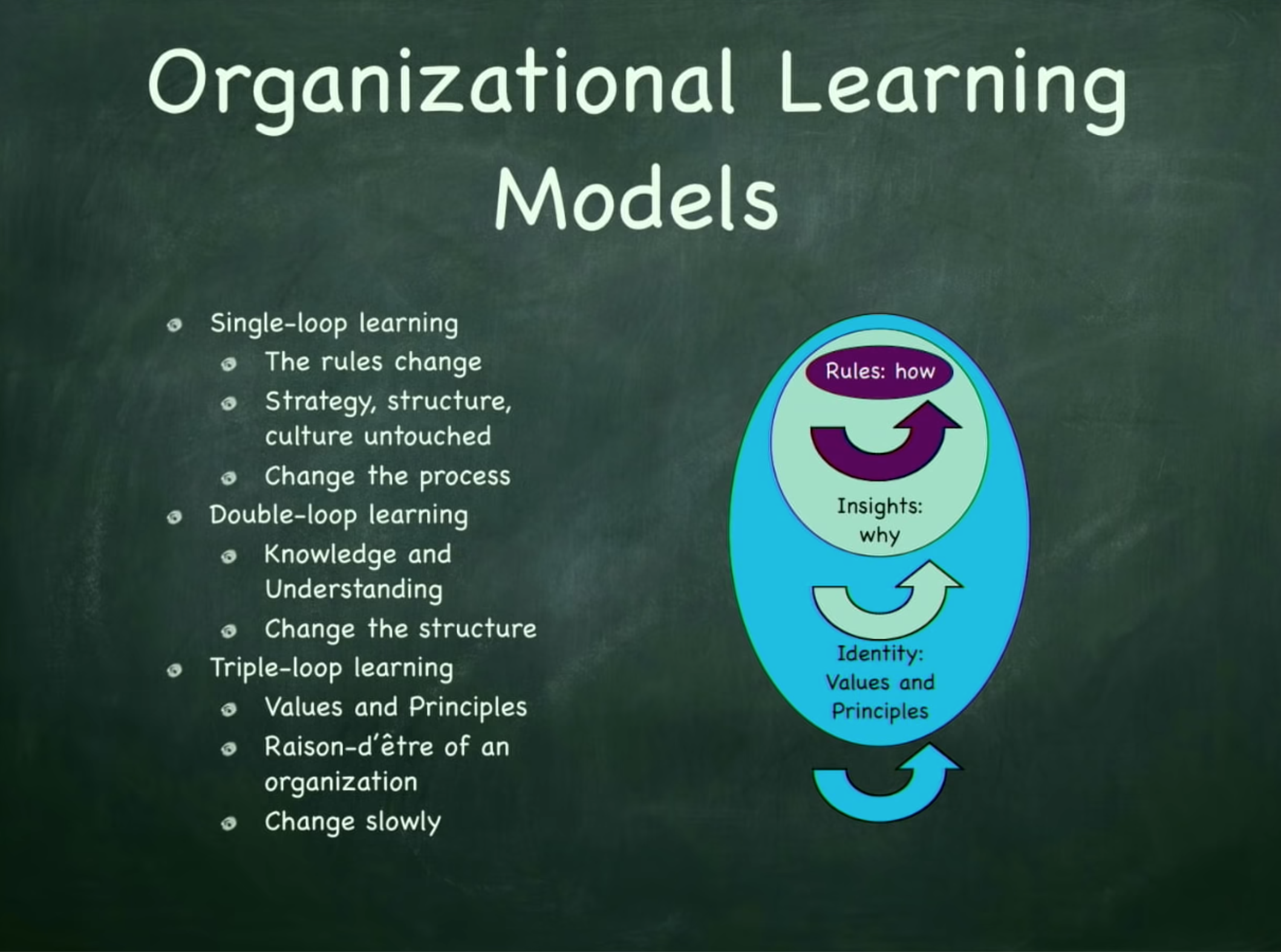 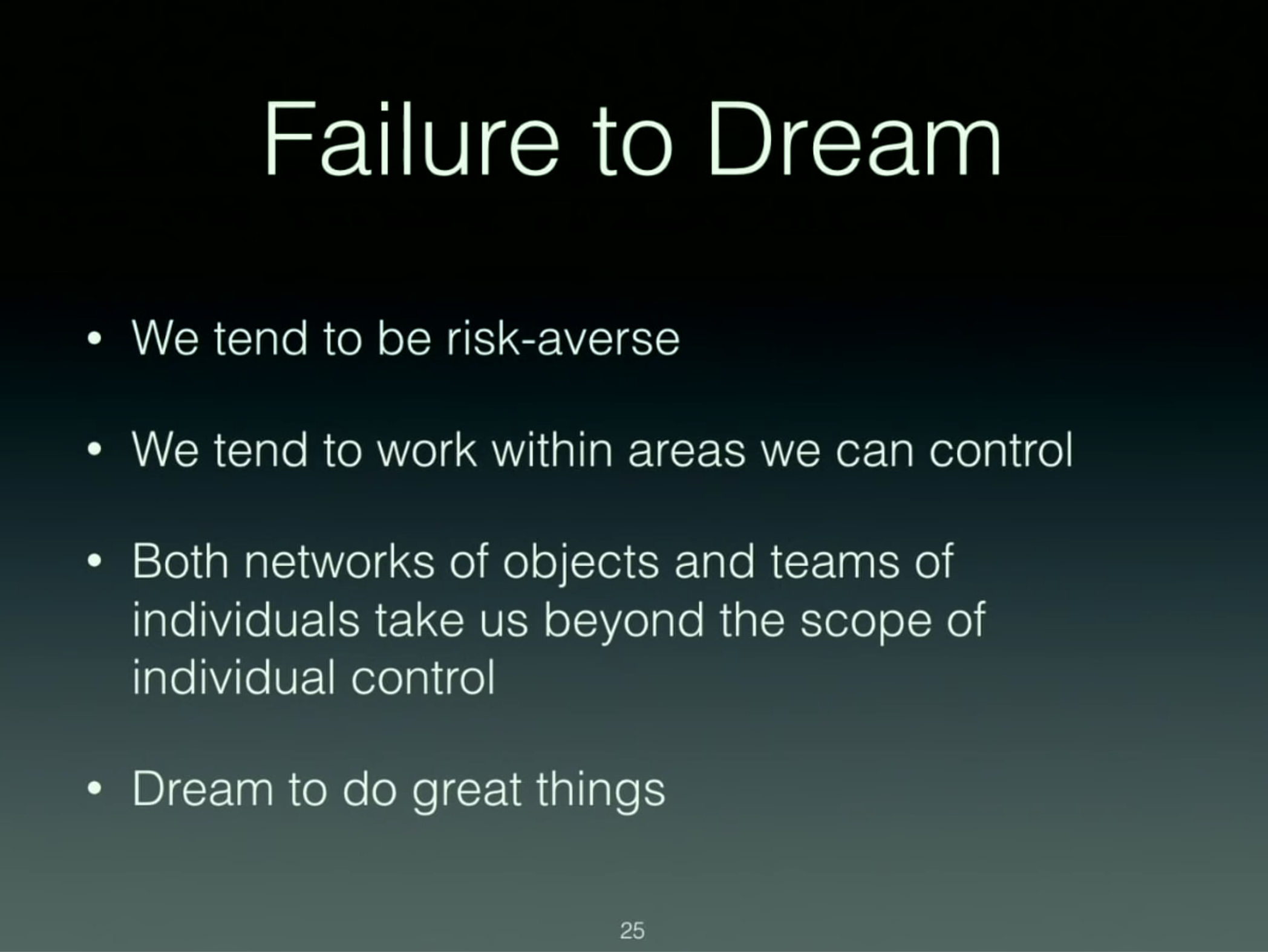 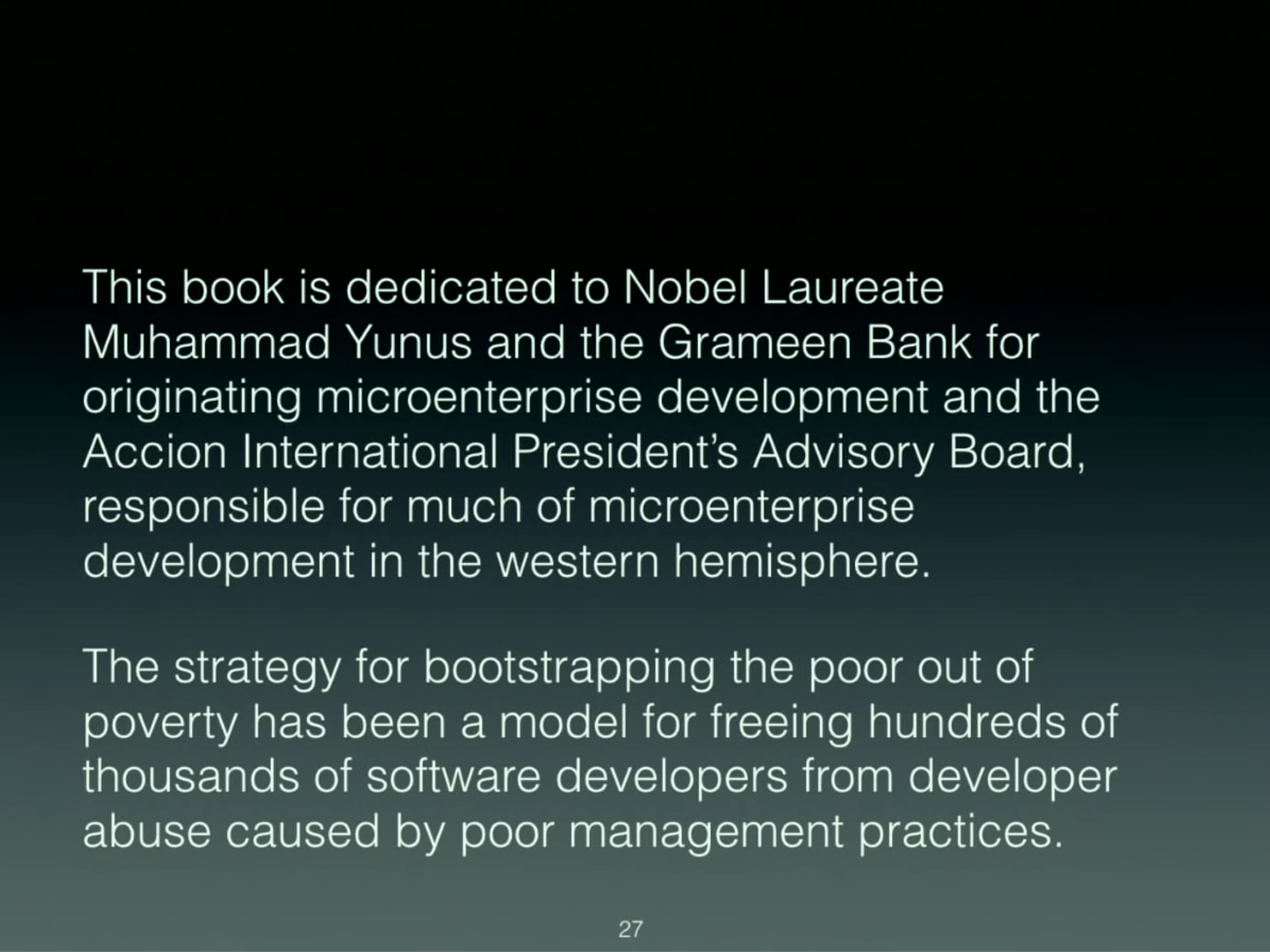 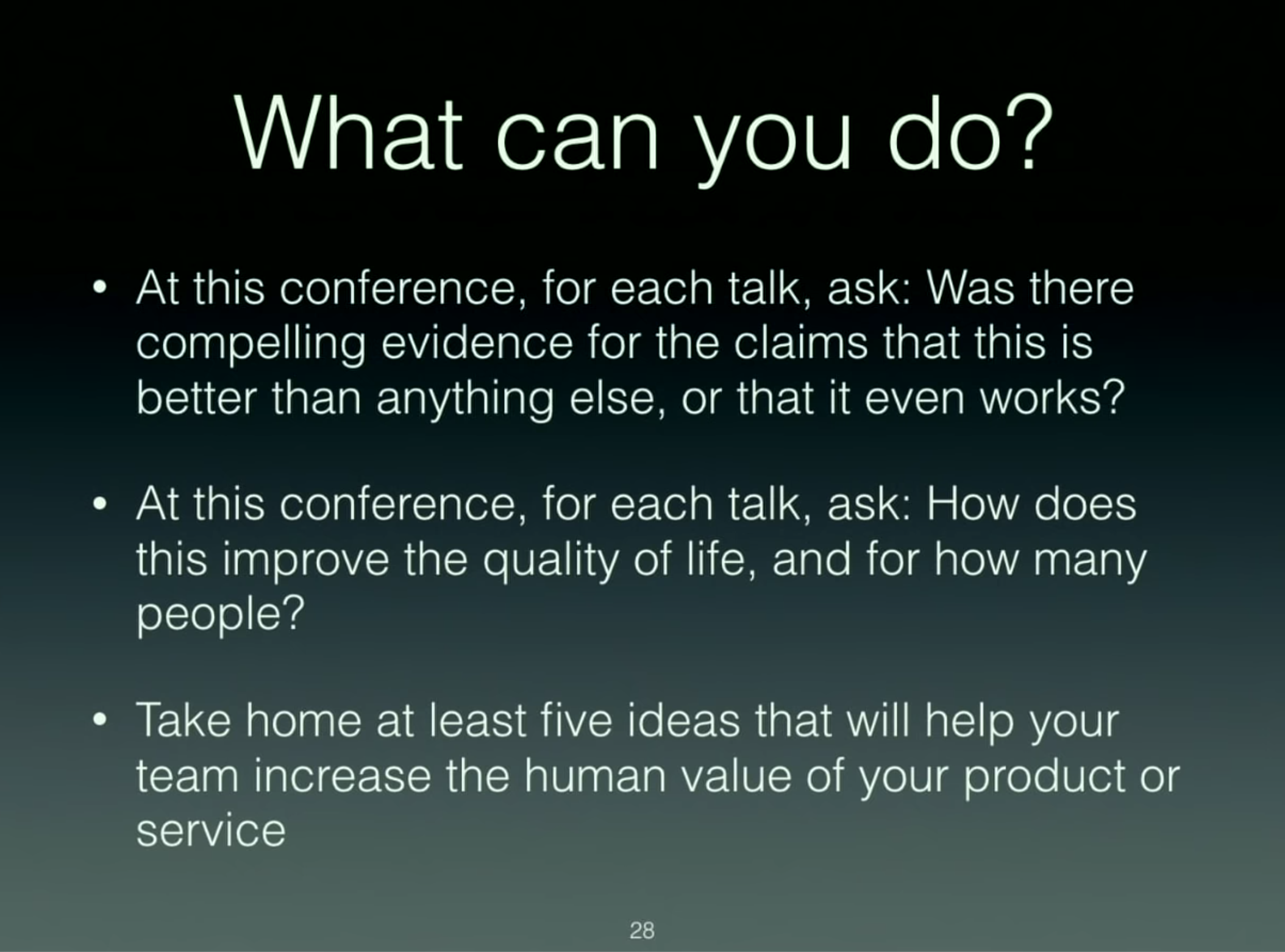 What about integration testing?

most important is usability testing

end user testing is all that matters

class will not support the use case

design after modernism by john tecuira

by christopher alexander (he got his from this field)

profesionalism has higher bar than the crap Bob talks about

GOTO 2017 • The Dehumanisation of Agile and Objects • James Coplien 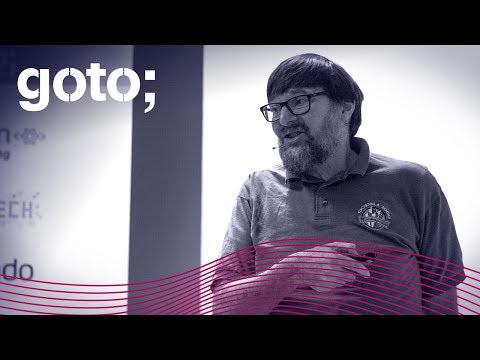 This presentation was recorded at GOTO Berlin 2017

James Coplien - Gertrud & Cope ABSTRACT It can easily be argued that agile grew out of the spirit of object orientation: its focus on change, on anthropomorphism, and on people. Alan Kay saw objects as a way for people to connect with their environments through their machines. As late as the 1980s people were still talking about anthropomorphic [...] Download slides and read the full abstract here:

| This talk caught me off guard. Information dense, authoritative, unique point of view derived from experiences my generation missed. We were given tools and told to use them, very little on why.

| Hairy shouty person warning... but you know you need it!

| I thought at any moment he would yell out: "Fools! Every one of you!"

| i have noticed that all the famous US IT professionals give presentations in Europe nowadays. In the US we have basically given away most of our development to India. It was about cheap labor costs. Sara Blackwell said she went to a offshoring/outsourcing conference. She was told that people in Europe and Australia and Canada would never allow this.

| As c++ better then java, diamond inheritance problem, memory leakage. TDD is not a technique to know what your code doing, it is a technique to make sure that side effects wont appear if you write code on large projects and that at any point you can refactor it to the requirement of the client.

| important information but hard to listen to... sorry, but he is not a good communicator